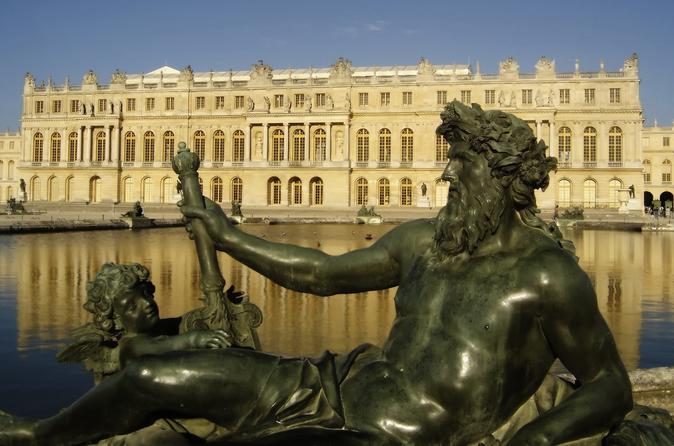 Uncover the secrets of France's royal court and the center of the French revolution while you tour the extravagant Palace of Versailles and its legendary gardens on our private guided tour.

The Palace of Versailles is one of the most famous palaces in the world and attracting millions of visitors each year from all over the globe. Touring the Palace at Versailles is simply a must for any visitor to Paris. Initially built as the summer residence for French royalty, Versailles’ legendary grandeur and opulence is unsurpassed. It has since been home to everyone from Marie Antoinette and King Louis XIV to France’s Dauphin and Dauphine.

Your Versailles tour begins with your guide meeting your group at the meeting point of your choosing and taking you personally to Versailles. You'll take a quick, 20 minute RER train ride that leaves you right near the entrance of the Palace.

Once there, you’ll visit the Palace and the King’s Suite, well known for it’s luxurious woodwork, paintings, and marble décor. You will see where Louis XIV conducted his royal escapades and where Marie Antoinette hosted her lavish parties.

You'll visit the Petit and Grand Trianon, two buildings built for different King Louis' so that their mistresses could be within easy reach from the Palace. You'll explore the lives of the French royal family and get an extraordinary view into the lives of the monarchy before they were overthrown during the French Revolution in 1789. You'll get to study your reflection in the same celebrated Hall of Mirrors that Louis XVI did, while also visiting the room where the treaty that ended World War I was signed.

You'll explore the stunning and expansive gardens that are as striking as the palace itself on your tour. Created in the traditional royal style, Versailles’ gardens are filled with more than just lush fauna – they are also full of exquisite marble and gold statues and lustrous fountains. Breathtaking and ethereal, the legendary gardens of Versailles actually served as the inspiration for many of Claude Monet's greatest paintings.

After your tour, you're able to continue exploring the Palace on your own, or heading back to Paris with your guide. The guide can recommend local restaurants in Versailles to stay for dinner.

Uncover the secrets of France's royal court and the center of the French revolution while you tour the extravagant Palace of Versailles and its legendary gardens on our private guided tour.