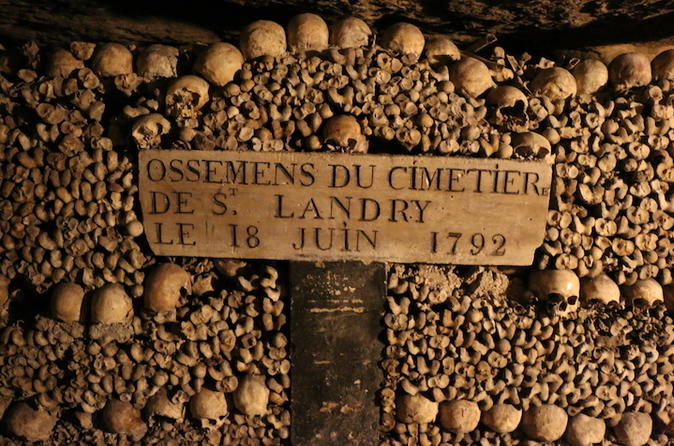 Our Paris Catacombs Tour includes passionate storytelling, skip the line tickets and a local expert tour guide. The network of underground tunnels is filled with the bones of over 6 million people and is known as "The World's Largest Grave".

Skip the Line Paris Catacombs Tickets
Wait times to see the Paris Catacombs sometimes  last up to 3 hours. During certain seasons you will find shorter lines, but  why take a risk? Don't waste precious time in line during your vacation in Paris. Our tour lets you skip the line completely and jump right into your tour of the darkness that lies beneath "The City of Light".

Catacombs of Paris - The Gateway to Hell
Our tour starts at the entrance of the Catacombs which is just south of the "Barrière d'Enfer" (which means The Gates of Hell!). After entering, you'll immediately descend a staircase deep below the streets of Paris to " The World's Largest Grave". Your guide will explain the creation of the Catacombs and the serious issues that the city used to have with finding places to bury the dead. Paris Catacombs HistoryBy the 17th century, the  cemeteries in Paris were overflowing. And so, the solution became to place the corpses' remains in the tunnels that existed beneath the streets of Paris since the 13th century. Originally, the French Catacombs were mines or ossuaries for extracting the limestone that built Paris. As the city expanded, it eventually covered areas with mines underneath. Sound like bad planning? That's because it was not planned at all. Many of these mines were abandoned and undocumented.The solution to bury the dead underground fixed more than simply the lack of cemetery space. The estimated  six million dead bodies actually reinforced the mines.

Catacombs Artwork, Architecture and Bones
The Paris Catacombs are one of the  last secrets of Paris and our tour will uncover the mysteries held within their walls. You'll move through a labyrinth of corridors and gates that connect the different underground areas. You'll see artwork and architecture like you have never seen before. And yes, you will see  thousands upon thousands of of bones, arranged by artists and architects to make the space more "livable".

Don't Worry, You Won't Get Lost!

With a local Paris Catacombs guide by your side, there's no danger of getting lost in the tunnels. Besides keeping your group on track, your tour guide will tell you stories about the history of the Catacombs and legends about Paris and its people. The guided Catacombs tour lasts approximately one and a half hours and finishes very close to the starting point. At the end, you will probably be famished, so ask your guide about the best restaurants near the Paris Catacombs for a hearty Parisian lunch.

Our Paris Catacombs Tour includes passionate storytelling, skip the line tickets and a local expert tour guide. The network of underground tunnels is filled with the bones of over 6 million people and is known as "The World's Largest Grave".