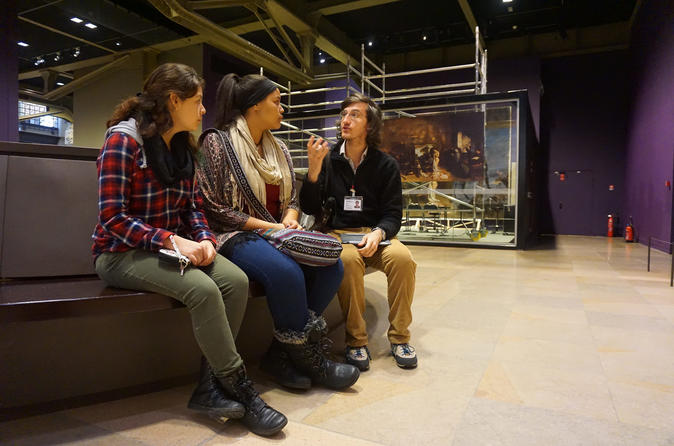 A small-group tour of the Musée d'Orsay led by an art historian.

Our three-hour, in-depth walking tour of the Musée d’Orsay examines the rich 19th- and early 20th-century collections of this world-class museum. In the company of an art historian, we will be introduced to the major art movements of the period—from the Barbizon school and Realism, to Impressionism and Post-Impressionism—as well as their most celebrated players. We will begin our tour with a discussion of the history and structure of the building, first constructed as a rail station by architect Victor Laloux for the 1900 World's Fair. After serving as a rail station for only 39 years (as electricity grew in popularity and trains became longer, the Orsay station's short platforms were rendered unusable), the station was preserved as a historical building in the late 70s, and opened as a museum in 1986. While the Orsay's collection includes all varieties of artwork produced from 1848 to 1914, our walk will concentrate primarily on painting. Following a roughly chronological trajectory, we'll begin on the ground floor with the works of the Barbizon school and Corot. With their emphasis on the elements of nature and atmosphere, the naturalists's work marked a major break with previous schools of academic painting which taught the need to anchor its subjects in classicism and antiquity. From here, we'll move on to the Realists who flourished under the 2nd Republic. Stopping by the works of Courbet's Artist's Studio and Manet's Olympia, we'll discuss the new techniques and ideas that Realism introduced to the visual arts, and their influence on the future Impressionists. We will then move on to look at other works from Manet's Dejeuner sur l'Herbe and Whistler's Portrait of the Artist's Mother to the Impressionist works of Monet, Renoir, Degas, and Pissarro. We'll discuss the spread of Impressionism and its radical departure from traditional schools of painting. Continuing on to the likes of Cézanne and Van Gogh, we'll discover how early Impressionism influenced all subsequent artists, and itself gradually morphed into a number of different movements such as Neo-impressionism, Fauvism, Pointillism, and Cubism. We'll wrap up with these later movements, precursors to Modernism, among which exist contributors such as Matisse, Braque, and Gauguin. By the end of our time together we'll have a robust understanding of these major art movements and how they contributed to each other's formation and the formation of modern art in the later 20th century.

A small-group tour of the Musée d'Orsay led by an art historian.