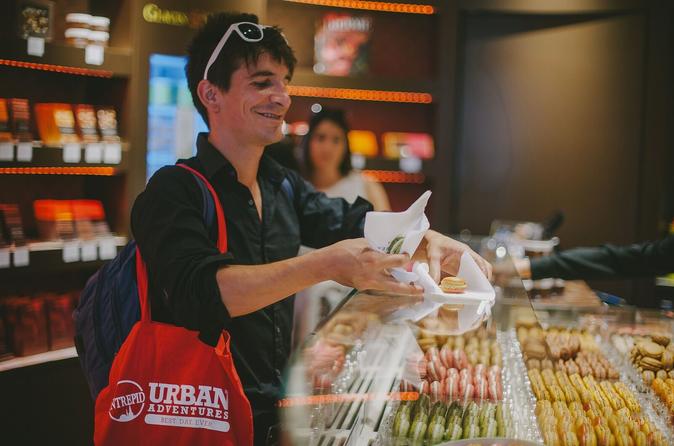 The best-preserved medieval area in Paris, the heart of the Jewish community, the centre of the gay scene — the neighbourhood of Marais is as eclectic as the gastronomic treats you’ll try on this tour! Get ready to eat, drink, and explore your way through the city’s gourmet charms!

Discover the enigmatic charms of France’s capital on this guided Paris tour that pairs secret local hangouts with delicious food and wine. You’ll start your Paris tour in front in front of the Notre-Dame Cathedral and then move on to the Hôtel de Ville, the city’s town hall, on the square where public executions were once carried out. Learn about the horrible death of Robert-François Damiens, the infamous man who tried to assassinate King Louis XV.

We’ll then move on to the little tangled streets of the Marais to spot beautiful medieval churches, corbelled houses, and narrow lanes. We’ll also pass by an iconic bakery whose baguette was elected one of the best in Paris and we’ll try our first pastry, a delicious meringue known as a ‘merveilleux.’

Next, visit Rue Saint-Croix-de-la-Bretonnerie, part of the French gay scene. You’ll learn how this part of city, once sordid, became synonymous with trendy Paris, and a shopping hub for fashionistas and the core of “bobo” culture. While you’re here, stop and sample a delicious macaron from one of Paris’ most famous pastry chefs.


Just a street away is Rue des Rosiers, the heart of the Jewish community. It’s a vibrant pedestrian street full of falafel stands and delicious Jewish-influenced delis. We’ll enter a fabulous chocolate store to taste a butter-filled pastry, called Kouign Amann, a specialty from Brittany.

Our Paris tour will then take us back to the South Marais, where stands the longest remaining piece of the 12th-century defensive wall of Paris. After a walk through impressive Saint-Paul’s church, we’ll stop in at a local wine bar, where we’ll get a professional wine tasting. We’ll sample some iconic French liqueurs like Cognac andArmagnac or “Old Plum” brandy. To accompany our drinks, we’ll also taste some delicious French cheese or charcuterie treats.

Continue to Paris’ oldest and certainly most beautiful square, la Place des Vosges, home of France’s national writer, Victor Hugo. From there, it’s only a short walk to your final destination, la place de la Bastille, the former prison that was captured on July 14, 1789, triggering the French Revolution. The area nearby is full of bars and restaurants, leaving you with plenty of options for carrying on with your evening in the City of Lights.

The best-preserved medieval area in Paris, the heart of the Jewish community, the centre of the gay scene — the neighbourhood of Marais is as eclectic as the gastronomic treats you’ll try on this tour! Get ready to eat, drink, and explore your way through the city’s gourmet charms!